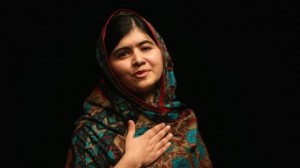 Women Chapter Desk:  Pakistani teenager Malala Yousafzai told President Barack Obama he could “change the world” if only he’d send books instead of guns to other countries.  Malala won the Nobel Prize this year and was shot in the head by the Taliban — for advocating girls’ education.

“My message was very simple,” Malala, who is now 17, said Tuesday at the Forbes Under 30 Summit in Philadelphia, speaking of her recent meeting with the president. “I said instead of sending guns, send books. Instead of sending weapons, send teachers.” Asked by the host, Ronan Farrow of MSNBC, how Obama reacted, she said simply that his response was “pretty political.”

Malala said she tries to live as close to a normal life as she can amid the attention that has come her way since a Taliban gunman shot her two years ago in northwest Pakistan. Thinking back on it now, Malala sometimes compares her story to the plot of a movie. “At the end, the villain loses and the hero wins, and there is a happy ending,” she said to applause.

Meanwhile, on the eve of Yousafzai’s visit to Canada, the House of Commons has unanimously supported bestowing honorary Canadian citizenship upon Pakistani teenager and co-winner of this year’s Nobel Peace Prize, Malala Yousafzai. She’ll participate in an event on women’s rights in Toronto.

Prime Minister Stephen Harper says she’s being made an honorary Canadian in recognition of her bravery in her fight for the rights of women and girls to go to school. Yousafzai was the target of Taliban assassins after she became an outspoken advocate for her right to attend class and she’s since gone on to become an international spokesperson on the issue.