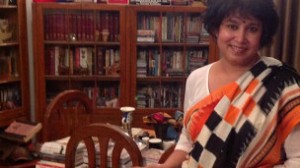 Maskwaith Ahsan: I recently watched Taslima Nasrin’s interview on Ekattor TV. In it she said that most people declare only about half of their life in their autobiographies but she has written about the other half as well, and that has become her crime.

It’s true that we are only fond of comfortable truths; and equally reluctant to bring out the other half of our life where darkness reigns. Taslima has so far tried to unfold our socio-cultural bigotry; as a whistle blower she has attempted to unmask our male-chauvinistic society with its inherent taste and tolerance for exploitation of women.

And so this society will continue to silence anyone like Taslima who revolts against institutional tyranny. Witch-hunts that haunt the West today have sadly been weaponised by our insecure male-chauvinistic society to be used against any woman who dares to challenge this insecure patriarchal status quo.

The same old story of branding a girl, declaring her derailed and either stoning her to death or chasing her out of the village. Surprisingly enough women activists are also quiet about the witch-hunting of Taslima.

This is the 6th year of a comparatively liberal regime in Bangladesh, yet the hollow uproars of a group of people who have no logic or moral authority behind them have still not been silenced. Taslima is a citizen of Bangladesh, she should be given the opprtunity to visit her motherland. We need more truth-tellers than soul-sellers to become a truly civilized nation.