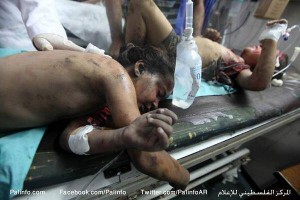 Rasha N Abushaban, Gaza, July, 2014: It is Day Five of the war, has it already ended? Wait, is it day five or six, I am trying to remember when this has started as if I am trying to remember something had happened years ago . I can’t believe it’s been only few days. The number of days doesn’t matter, Israel can wipe out Gaza in few days . They want to prolong the Palestinians’ suffering and deepen their scars. Last night started with more Israeli naval fires and still the bombings have been less intense in my area of Gaza city targeting other locations across the Gaza Strip.

The most disgusting and disturbing news in this assault is what happened last night when Israeli airstrike targeted a rehabilitation center for individuals with disabilities in Gaza causing the death of two women with disability and injuring many other while they were sleeping. In the same nights many charities and NGOs were targeted as well.  How shameless is this? How can this be justified in any way?

How can I sleep now, after all that I heard and saw last night? For all the people around the world who can just simply sleep. If you have no bombs to hear, no hovering drones, no awful pictures of dead bodies parts and no heartbreaking videos of parents hugging the dead bodies of their kids bailed out of the ruins of their houses. So you have to appreciate this blessing of sleep.   Every time I close my eyes I remember that there have been hundreds of houses which were bombed with the people sleeping inside, sometimes with few minutes prior warning and many others without. When a house is targeted by F16s, it automatically means 5 surrounding houses are severely damaged as well due to intensity and severity of the attack.  What if in the middle of the night any of the neighboring houses get a warning and we need to evacuate our house. Can you imagine someone to come telling you  that you have 7 to 10 minutes to leave everything behind to run and watch everything destroyed? Homes are not constructed of walls or blocks, our homes are our childhood, our memories, our dreams, and our haven. How does it feels like to leave your books, your pillow, your money, your jewelry, your little daughter’s favorite doll,  your son’s sports medals, or even your favorite coffee mug. You leave this behind to not die once in case if you stayed but you will find out that after that you will die every day hundreds of times. 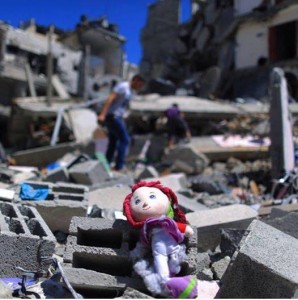 One of the stories I heard in the news during the past few days was that a young man, Yaser al Haj, who  had a phone call from the Israeli army telling him to evacuate the house within 10 minutes.  Yasser wasn’t home he was out with his friends. He tried to call his family to tell them to leave the house, but no one answered the phone. He ran as fast as he could trying to reach his beloved ones. He got home and everything was gone, the house, his family, everything was razed to the ground. I just imagined how he will live and feel for the rest of his life for something that wasn’t his fault.

Today I did not have enough energy to follow the news minute by minute. Though I kept flipping my facebook home feed checking some of the stories which comprised of alot of the heartbreaking photos and devastating  videos.  One of the stories I read of one of the children who was killed in yesterday’s massacre of the Ghannam Family I mentioned in my diary. Her name was Kifah (which means struggling in English), she  was deaf. I was thinking that she had never heard her mother’s voice, never heard a song, never heard a cat or sparrow and finally she didn’t hear the sound of the bomb which caused her death .

What has lifted my spirits during the days is the news about the demonstrations in several countries around the world in solidarity with Gaza and the pressure to stop the aggression and to expose crimes of the occupation. Protests in UK, Europe, Asia, Japan and Arab countries, it feels just uplifting to know that there are people across the globe who are Pro-Palestine that recognize our just cause and support us. The people know and I wish that they put more and more pressure on their governments to take actions. There was that video that absolutely made my day of a little British  kid shouting in a protest in Dublin  ( From the river to the sea , free free Palestine , free free Gaza )

I just can’t understand how some people can be pro-Israelis and can be logical at the same time. I will give you a simple background in the way I see it.  66 years ago a state was built as a refuge for a persecuted people in a place where another people already lived. Persecuted Jewish refugees from Europe found a home yet another group of refugees (Palestinians) was created. Israeli expansion has created ‘Jewish only cities ‘ in an occupation that is ‘permanent and entirely unjust. For now and for all wars against Gaza, Israel has bombed a captive population in Gaza all to gain maximum land. Israel does want to eradicate the Palestinian people with Hamas as an excuse or without them.  Our land has been stolen from us for decades and we have been suffering ever since. We are not getting our land back with the Oslo Accords, neither with the racist two state solution, and definitely not with the security coordination. Peace talks have actually made things worse. Peace talks are good if they are real, but not if they are a threat for landgrab.

The resistance is a must for liberty. The way to liberty is neither  smooth nor  free of charge. The way to liberty is long and this war is one mark in this way.   In this context I remember the quote of  Benjamin Franklin  “They who can give up essential liberty to obtain a little temporary safety deserve neither liberty nor safety.”

The highlight of ‘Day Five’ was when Al Qsam brigades announced a hit on Tel aviv in retaliation. They hit Israel with advanced kind of rockets  that was used for the first time. They succeeded to break through the Iron dome of Israel. Some announcements from the Israeli side about cases of horror caused for the people and one fatality due to heart attack. According to some analysts of the Israeli media, Israelis said that the resistance fighters achieved what whole countries armies couldn’t with Israel . 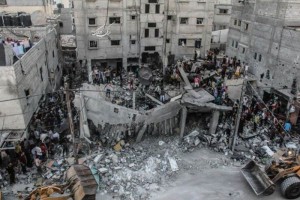 All indications show that the resistance in Gaza won’t accept any ceasefire without conditions. The least condition of any possible ceasefire is to lift the siege that has been imposed on Gaza since 2006. We are just waiting for this.

‘Day Five’ is over. I wish to stop writing my diaries, I want this to be over. However, I just want to tell you that I wrote this dairy sitting next to the window while looking to the moon. It is full moon today, so beautiful. Usually, I love the night time, it brings to mind the notion of tranquility and safety. But it has been totally the opposite since this offensive’s started in Gaza.