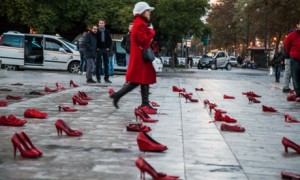 Estelle Tang: I know you are not the guys catcalling women in the streets. I’m not trying to make you feel bad for being a man. But I want to tell you about what it’s like to be a woman.

To all my male friends,

I want to tell you about something that happened to me today.

I was walking to the gym when a guy on a bike rode past and said, “baby, can I smack that ass?” I am used to this kind of behaviour in my New York City neighbourhood, so I usually ignore it. Trust me – if I had it out with every man who said things like this to me, I’d have a much shorter, much more annoying day. So I just kept walking. He said it again, but before I could even decide what to do (or if I should do anything) about it, I felt his hand on my butt.

That’s right. He rode up to me on his bike so he could touch my arse. Then, again before I could think about doing anything, he rode away.

I was, and am still, so angry. At the time, I felt a bit sad and scared but then quickly grateful that nothing worse happened. Soon after the initial fear subsided, I started thinking about whether I should go to the gym at all. Maybe I should stay home and never leave the house again. That would be safer. Silly, no?

Since I moved to New York City from Melbourne, I’ve been subjected to street harassment with a regularity that almost defies belief. To begin with, I chalked it up to the bigger population in the city, and didn’t want to make a big deal out of it. I felt – and still feel – extremely grateful that I’ve rarely suffered any worse than catcalling, and it seemed like something I could just deal with and move on.

But eventually, I realised it was happening every day. It’s so predictably a part of my life now that I cringe in anticipation whenever a man looks at me. I internally genuinely bless every man who turns his face away from me when I walk past. I’ve tried dressing down and wearing no make-up when I leave the house, which hasn’t helped. It should go without saying that I don’t want to be the one who has to alter my behaviour to go unnoticed, and I hate that I even felt like I should try – but results say it’s a useless exercise, in any case.

And because of recent awful events, the harassment I receive has seemed like the gentler side of a spectrum that has a much more violent and destructive end. By now, you’ve heard the news that 22-year-old Elliot Rodger posted a video and wrote a manifesto about his hatred of and planned retribution towards women, before shooting and killing seven people, including himself in California. Within days of this, a man shot at three women after they refused to have sex with him and his friends. This terrifies me. Every time a man whistles me up on the street, murmuring that I’m gorgeous or sexy, I ignore him. And doesn’t that mean I’m rejecting him too? Could I be in the same kind of danger one day?

I realise this doesn’t have much to do with you. Most of you are back at home in Australia, and you’d have no reason to know what a day in my life is like. But I want you to know. A few months ago, I avoided telling my boyfriend about these incidents, thinking it would sound like contextless boasting: “Look how many men think I’m hot!” But I’ve started telling him about more and more of these incidents. In fact, I want to start telling him about every single one. Not because I’m delighted to hear about how attractive I am to these men, or because I want people to feel sorry for me. I just want him – and you – to know. That harassment and violence against women is a very real thing, and that it affects its victims daily.

I don’t want you to think that this is something that only happens in America. Sure, it’s constant here, but my female friends are catcalled back home in Melbourne, too.

Then there was that time the guy on the train tried to fondle me. I’m not sure I ever told you about that. When I told a group of female friends about this on Facebook (in all caps; I was very angry), I found I wasn’t the only person with such experience. One girl I know in London told me that she had had a very similar thing happen to her. While she was jogging, a boy on a bike slapped her on the bum. “I still feel rage and I feel rage for you,” she said. Another girl I know, in Poland, had literally also just walked home from the gym and been approached by a drunken man who tried to attack her. He verbally abused her as she walked away. “The saddest part is that I saw it coming,” she added. “I had this reflex as soon as he made eye contact with me, steeling myself for the inevitable, calculating what was the worst that could happen, and how to make that not happen.”

I was moved, yet also chilled to see an Instagram post in writer Durga Chew-Bose’s feed this week that reflected the danger women face in our lives every day: a screenshot of safety check-ins that she and her friends routinely sent each other. When texting each other last thing before bed, these women said not goodbye, or goodnight, but things like “Home! You?” or “Get home safe”.

It’s understandable how much responsibility we women take upon ourselves in these situations. We want to be able to move around freely, but we don’t want to be hurt.

Honestly, I don’t want to spend too much time thinking about what happened to me today. But there is another aspect to it. Legally speaking, in Australia this kind of thing is illegal. It’s assault, as is force of any kind visited upon an unconsenting person.

Anyway, thanks for listening. I’m winding up now. I know you are not the guys doing this. I’m not trying to make you feel bad for being a man. Believe me, I know there are good and awesome guys out there. But I suppose I wanted to explain a bit about what it’s like to be a woman. And while I’m at it, perhaps this goes a little way to explaining why I’m always a killjoy about your rape jokes (sorry, I will never laugh at those.) I’m not asking you to become my personal vigilante force, or anything like that, either.

What do I want? I’m not sure. Maybe keep your eye out; read the #yesallwomen hashtag for more examples of what women have to deal with on a daily basis; don’t pay attention to the people who said Rodger’s wasn’t a misogynistic crime; and don’t make rape jokes?

I’m not entirely sure. I guess I just wanted you to know.

(Published in The Guardian)