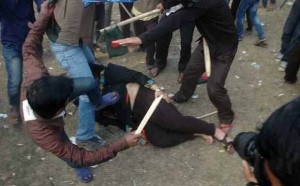 Pamelia Khaled: ‘Honour killings’ are on the rise among the Muslim countries including Canada. According to the United Nations Population Fund, approximately 5,000 women and girls are murdered every year in so-called honour killings around the world, Cohen’s report said.

Why conservatives’ parents want to kill their own children? How and why they fall in the trap of so called family honour, tradition and its ill practice and botch-up with their ideology and religious view. What made them so cruel instead of being loving parents? The killing of one’s own child is happening with a girl, usually a daughter; the main reason is her behaviour has brought disgrace and embarrassment to the family.  She considered as a shame for the family.

An overarching question arise who will educate the killers who kill their own children in the name of so called ‘honour killings’ if a country’s mechanism and its law do not support enough women? Why women and children are not well protected after so many killings?

How women are being observed since the ancient time and even in this modern days in the traditional society in general, it poses a question to humanity? A woman is a person/an individual who has free will, do a man believe it or not? Where needs correction?

When a gender blind father/brother/man/husband/son will stand up for these destitute women? Is there any hope for women in this male chauvinist and gendered world?  How long conservative Muslim men will be covered his eyes with a blindfold? Unmasking fundamental Islam, isn’t it crucial?

A traditional man, who patronizes, disparages and always denigrates woman in the belief that they are inferior to man. Same about other gender, a mother’s behaviour can be gendered for her location and veil of ignorance. Thus she can support ignorant man willingly or unknowingly.

The veil of ignorance needs to be removed, by whom? Absolutely by us, the thinkers, writers, social actors, as states cannot do it alone. So, how we can prevail ‘honour killings’? Need to develop ‘honour killings’ social awareness, more protest, and more remonstration and perhaps a gender sensitive curriculum, quality education.

As we know, Sati-dah pratha (burning alive underage, child bride, young girls, adult woman or old woman), which was a Indian Hindu custom, funeral of a woman alive with her dead husband. This brutal system had to ban by making rules by the British government with the help of the then, enlightened Indians.

It is not a long ago only a few hundred years back it was an established Indian social /religious custom. Raja Ram Mohan Roy is considered as a social reformer, the pioneer of modern Indian Renaissance for the remarkable social reforms in the 18th century India. He took a few efforts for social reformation: the significant reformation is, the abolition of the Sati-dah-pratha-a practice in which the widow was forced to sacrifice herself on the funeral pyre (a heap of combustible materials were used such as woods and kerosene) of her deceased husband. His social reform efforts were also instrumental in abolishing the purdah system and child marriage in India partially.

It is time for the Muslim thinkers to turn their head and stand for their daughter/ women and their wellbeing. When women will be free in Muslim’s eyes? Though there is enough examples in the past Muslim history such as Ayshah, Prophet Muhammad’s (s) wife worked as a leader in the Arab Muslim community, she was  a decision maker and guide after Prophet Muhammad’s (s) departure. Also in Pre- British India Razia Sultana proved herself for her ‘free will’-she became a leader of her kingdom. After all these evidence Conservative Muslims mentality did not become change even in 21st century. Prophet Muahmmad (s) encouraged Arabian tribal communities to keep alive their daughters/ girls not bury them alive; however they seem alive for stoning to death for their free will.

Among the many, I am narrating only two stories: these two stories narrate enough where women have status in the conservative Muslims’ mental world. How they visualize women role, how a woman should be.

The report on Farzana Parveen’s honor killing was published by the numerous   news papers across the world on 27th May, 2014. How much it will have impact on the barbaric social customs until the state’s policy is not strong enough taking proper action to stop this brutal honour killing system. It is not enough to praise the way Pakistani Prime Minister Nawaz Sharif made a plain statement that the stoning to death of a woman by her family in front of a Lahore court is “totally unacceptable”. Where is his commitment to save Pakistan’s daughters and women? He must take steps and redesign his mechanisms to save women from the conservative group. While a father, head of the family, is not a protector any longer, the state needs to re-think about its role/function with reference to honor killings and any gendered issue.

Farzana Parveen, a newly married young girl who was three months pregnant, stoned to death by his relatives. An outrage provoked the father and relatives when Parveen had testified to police that she had married Iqbal of her own free will.

A cruel inhuman father and her relatives planned for stoned to death. In front of police and public she was battered brutally by relatives because she married against their wishes. Her husband Iqbal told the BBC that police simply stood by during the stoning his wife though he screamed and asked for the assistance to save his wife.

Unfortunately, Lahore’s police chief has completely refused Iqbal’s statement and made comment that Praveen had been already killed by the time police arrived at the scene.

How an elected government feel when there are hundreds of so-called “honour killings” in Pakistan each year is reported? “As it is known in Pakistan, where it remains fairly common, karo-kari was only recently outlawed, though “perpetrators are rarely brought to justice,” said by Cohen’s report.

It is not enough asking for an investigation and prepare a report for taking action to the chief minister of Punjab province by Prime Minister Nawaz Sharif.

There are daunting task remain for Prime Minister Nawaz Sharif and other Muslim leaders and Western leaders. What is it? All stakeholder and civil societies, amnesty international, human rights agencies including UN need collaboration to work on ‘honor killings’.

Require to develop a public opinion, a British India rule similar to Sati-dah Pratha banning, and a social awareness development programme in the grassroots level among the Muslim countries (Muslim conservatives) including West. Educate them (Muslim conservatives) what Muslim religion and its holy book says exactly. Need action to erase women’s traditional status from the conservatives’ crippled, scrupulous, unhealthy mind.

On the other hand, Canada, a first world country, is known for a heaven for children and women rights where these conservative men are taking advantage of living in this civil society but successfully completing their evil plan, so called “ honor killings”.

Due to ill practice of fatwa and so called Shariah law, rape victims, even underage girls, as well as women are accused of infidelity or pre-marital sex in countries such as: Bangladesh, Pakistan, Argentina, Ecuador, Guatemala, Turkey, Jordan, Syria, Lebanon, Iran, Israel, the Palestinian Authority, Venezuela, Peru and Egypt etc.

The honour killings are happening largely in the Muslim countries. Even in Canada, this incident is also happening very often. Currently in Canadian courtrooms cases are popping up frequently. Because, first-generation conservative Muslims/ head of the family, usually a father/sometime both parents struggle to balance with their children’s life style followed the strict, traditional ways. They find them in imbalanced position with their children’s social need and their aspiration, as girls want to fit into the liberal peer groups and modern society.

The report below stated by Tobi Cohen, CANWEST service, 2014. Dr. Amin Muhammad is a psychiatrist at Memorial University in St. John’s, N.L., who is currently working on a report for the federal government about honour killings in Canada. He said there’ve been 13 such cases in the country since 2002. A few stories were reported by Cohen.

1.On June 16, the father and brother of a slain Mississauga, Ontario., teen were sentenced to life in prison after pleading guilty to the December 2007 murder of Aqsa Parvez, a 16-year-old girl of Pakistani descent who wanted to wear western clothes and get a part-time job like her Canadian peers.

2. Days ago, an Afghan mother was arrested in Montreal, accused of stabbing her 19-year-old daughter after she stayed out all night in a case that’s now being probed as a possible honour crime.

3. And then there’s the case last year of Muhammad Shafia, his second wife, Tooba Muhammad Yahya, and their son, Hamed Shafia, accused of killing Shafia’s first wife and three daughters, who were found in a vehicle submerged in a canal in Kingston, Ontario.

Dr. Muhammad mentioned that there is an upward trend. More cases are coming to the forefront in the legal system.

This report further notes that ‘”honour killings are not in any way condoned in the Qur’an, Islam’s holy book, he suggested the idea is coming up more as a defence for murder by people hoping to take advantage of Canada’s cultural sensitivity in order to receive a more lenient sentence”. However, the advantage of liberal society taking by the girls is problematic for a conservative family that may be the situation of West, Canada. What about the girls/ victims of third world countries. Basically, women are prohibited to take any kind of social advantages what men enjoy in Muslim countries specifically in a conservative family.

In Cohen’s report, Dr. Muhammad mentioned that he suspects mental-health issues are behind most cases. I disagree with this statement; this is not acceptable in the case of honor killings issue, as it is a social custom / culture, a tradition among the conservative Muslims. It cannot be stated simply as they are mentally ill or they have personality disorder. Mentally ill, this sort of simplification about the perpetrators, the killers rather supports to save the killers and encourage more killings.

Dr. Muhamd’s  2008 report, which is a co-written report also indicates that honour killings started date back to ancient societies. According to Dr. Muhammad’s report, “Incan law allowed husbands to starve their wives as punishment for adultery, while the Aztecs permitted stoning or strangulation as punishment for such crimes”. The above ancient stories, thus proves the ’honour killings’ is a socially constructed concept, a social ill. With reference to honor killings in Canada, banning the practice of ‘honour killings’ is not enough. I suggest that all Muslim countries including Canada require a rigours action. Need to develop ‘honor killings’ awareness programmes in the grassroots level: through public schools curricula; local Muslim community leaders; and the local community organizations.

The writer is Doctoral Candidate in Curriculum Studies and Teacher Development