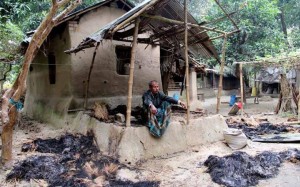 Meghna Guhathakurta: “IF they want us, we will stay.” For Renu Bala of Chalna who had come to help members of her family in Obhoynogor victimised by the recent post-election violence, it was a big “If”!

At the same time it was a challenge thrown to the Bangladesh state, a state which she had returned to after fleeing to India for her life from the atrocities of the Pakistan Army in 1971. Through crouching movements she described as if it was yesterday, how she with her family had crawled across muddy water full of leaches, their skin scratched and bleeding by the thorns of bushes they hid under until they arrived at the Indian border. When they realised they were safe and no longer hounded by Pakistani Army and their informers, they had given the uludhoni (the ritual ululating which Hindus uttered on auspicious occasions). They were handed slips which meant that they could get some rice and pulses as ration.

Yes, they were refugees. Her daughter had lost her newly-wed husband and yes, they had a few relatives who lived around West Bengal and yet when the war was over in December of 1971, they had all chosen to return to this newly born country, borne out of the sacrifices of millions like them, because it was after all their home, and home is where the heart is. In short it was where they lived, where their families lived, where people know each other and came to help each other when in need, just as they had come to help their families in Obhoynogor. It was a place where she also wanted her young widowed daughter to live instead of India.

Why was that? Because she said, in India they did not take care much of each other as much as they do here. Relationships were distant, while here the bonds were close perhaps because they grew from a common belonging to their land and ancestral homestead (bhitemati).

But then, home is also a place where you should feel safe and sound, where what little you have should be protected. Did she feel that she had that here? For 42 years they had felt they had, but now she did not know anymore. She did not know whether the neighbors with whom she exchanged greetings with, wanted them there, she did not know whether the state would actually carry through their promises of finding the persons responsible for the attack and punish them so that such incidents never occur again. She did not know if when all the people who came to express their sorrow and console them leaves, and when special police protection have been withdrawn, whether they will be attacked in the dark of the night, not collectively, but one by one, brutally and in a cool headed way.

That is why she said “if they want us.” By ‘they’ she indicated the state : the government machineries and also those indicated in power relation, local government, administration, elites of the locality, political parties and above all the ethos emanated by the Bangladesh itself and all those who help to form it.
It is this ethos which is largely in question now. Many thought that Bangladesh was born as a result of the contestation of the two-nation theory, the theory that envisaged one state for Hindus and one for Muslims in South Asia. Bangladesh in its initial constitution envisaged a state where Hindus, Muslims, Buddhists and Christians would all be treated equally in terms of citizenship rights. The notion which illustrated this ethos was secularism.

Yet this was the first casualty (along with socialism, another marker of equal citizenship in terms of wealth distribution) in the political developments that ensued in the independent state of Bangladesh after the assassination of Sheikh Mujibur Rahman. In subsequent political developments not only has the concept not been able to regain its former stature but have been consistently misinterpreted by fundamentalist quarters either as atheism or defensively adopted in liberal civil discourse in its benign form as religious tolerance devoid of fundamental questions of citizenship rights. In other words secularism in the liberal discourse in Bangladesh has failed to address and counter the two-nation theory that still reigns supreme in the politics of the sub-continent.

Are things about to change? Not if you consider that the current Government even in its last 5 year stint with three-fourth majority in the parliament had resisted reverting to the original 1972 Constitution in apparent consideration of political expediency. On the other hand the same Government in response to national demand had established the International War Crimes Tribunal for the trial of war criminals of 1971.

The very process has had the impact of reviving foundational issues of identity and ethos raised at the moment of the birth of Bangladesh but interestingly raised by a new generation that had not even witnessed 1971. The Gonojagoron Mancha which was born out of a gathering together of people to demand the punishment of war time collaborators is also raising their voices about identity of the Bangladesh state in which they see their future. Contesting the culture of impunity, their struggle has now taken them out of Shahbagh in the long march to Obhoynagar, where they are raising slogans such as “Hindu Muslim bhai bhai, miley mishey thaktey chai”(Hindus and Muslims are brothers, who wish to live together); “Amar mati, amar ma, Pakistan hobey na” (My land, my mother, will not become Pakistan); “Muktijuddher Chetona Shamprodaik hobey na” (The consciousness of the Liberation War, will never become communal).

It is upon this trend in the new generation that the people of Obhoynagor is pinning their hopes on. The youth are asking the right questions. How far they will be able to resolve them is yet to be seen but the hope that was expressed by the millions who thronged to see them on the way and at the place of their destination was that Gonjagoron Moncho will act as a catalyst to create a space in the existing political culture that may help to light up many awakenings among the down trodden and voiceless.

The road no doubt is uphill and laborious but it is the only way forward for those who wish to see Bangladesh in the image of ‘Obhoynogor’, a destination where the mind is without fear and the head is held high.

The writer is researcher and analyst.
E-mail: [email protected]

(Collected from The Daily Star)