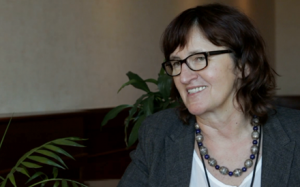 Women Chapter: Jasna works with Peace Boat, an organization working to promote non-violent conflict resolution and justice aboard a chartered passenger ship that travels the world on peace voyages. Jasna organizes educational programming for students from around the world. Peace Boat offers students a direct learning experience that promotes discussion and reconciliation as means to conflict resolution.

Born and raised in Sarajevo, Jasna’s passion for peace surfaced when war in the Former-Yugoslavia began to brew. In the years leading up to the conflict, Jasna worked as a print journalist. She became deeply unsettled by war propaganda in the media and came to the realization that something had to be done to prevent the pending outbreak of conflict. Despite her efforts alongside other peace activists, civil war ravaged the country for eight years.

The escalating conflict forced Jasna to leave Sarajevo and she settled in Zurich, Switzerland. Jasna began to try to understand the mechanisms of war in order to be able to identify the signs of conflict escalating into war. In particular, she employed her background as a journalist to understand the ways in which the media is manipulated in times of war to disseminate propaganda.

Now an expert in the area of peaceful conflict resolution, Jasna teaches others to employ strategies to prevent conflict. “War doesn’t happen overnight,” states Jasna, “There are years of preparation. We know now how to recognize the signals of coming troubles. We know the mechanisms that make it very clear war is coming. We need to work more on prevention.”