Women Chapter: Monash University academic has been denied permanent residency simply because he has an autistic son. 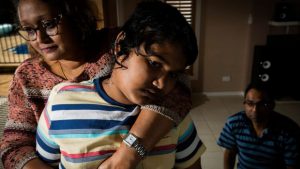 Though it isn’t easy raising a child with autism, Biswajit Banik and his wife Sarmin Sayeed  were doing it with greater ease after moving to Australia in 2007. But the Monash University lecturer and his GP wife were devastated when they learned late last year that their dreams of living permanently in Australia would be shattered because of the disability suffered by their son, 12-year-old Arkojeet.

Immigration officials have told Dr. Banik his application for permanent residency has been denied, despite living nine years in the country, solely because of his son’s disability. The family now faces an uncertain future, not knowing if they will be ordered to leave Australia.

“The uncertainty of our future, it is pretty difficult,” he said. “Our battle with immigration is overwhelming…It’s quite devastating because all our life we have believed in a fair and equitable society. “We are now facing discrimination because of a disability and health condition that my son has. It’s just not right.”

Dr Banik and his wife, Dr. Sayeed, say they have contributed to the Australian community through their services as health professionals and academics. “I have tried my best to contribute to this country, I have been working a lot after hours providing services that are needed when there is no other doctor,” she said.

The Melbourne family has been inundated with support from their colleagues and students who have written on their behalf to the department and politicians. They are appealing to Minister Peter Dutton to intervene and allow them to stay permanently in Australia. “I understand he(Dutton) has a lot of responsibilities, but if he considers us as good citizens and could consider our situation in a more compassionate way…to allow us to stay in Australia,  we will work for the betterment of the Australia, we love the country,” Dr Banik said.

Dr. Banik and his family had their appeal for a permanent visa rejected by the Administrative Appeals Tribunal for Migration and Refugees, because their son has been diagnosed with “mild autism” and could possibly be a financial burden on Australian health services. Documents seen by Fairfax media describe Arkojeet as being “on the high-functioning end of the spectrum…his condition is likely to improve over time”.

The files note that his condition could potentially require him to access public health services in the future. “A hypothetical person with this disease at the same severity as the applicant would be likely to require care or community services during the period of a permanent stay in Australia,” they say.

But Dr Banik said he and his wife have covered the costs for all of Arkojeet’s health expenses, excluding the special school he attends for autistic children which is funded by the state. “The only (public) service he has accessed is the special school, and that is a condition in our visa that we have to organise schooling for a child. “Psychological assessments, therapies, swimming lessons, everything is paid by us…His treatment is not in any way burdening the Australian health system,” he said.

Dr Sayeed said the detrimental impact of leaving Australia and moving back to Bangladesh would have on her son and his life would be far too great to comprehend at the moment.

“Arkojeet has never known Bangladesh, it doesn’t have any services required for children with autism…I have heard the places they have for special kids have had complaints of abuse made against them.”

A spokesperson for the Department of Immigration and Border Protection, released the following statement, “The family have made a request for Ministerial Intervention and their case is under active consideration.”