Muktasree Chakma Sathi: To be honest , I am actually glad to see indigenous youths started talking about so called “indigenous-friendly” non indigenous men whose targeted girlfriends were always indigenous girls (due to their fantasy regarding indigenous girls aka hilly chicks). 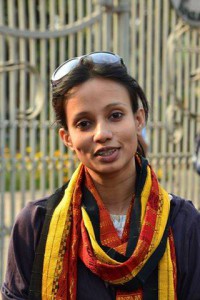 There are such type of people whose perverseness or allegation against them, we tolerated for long as we were thinking, “but he works for us, our rights”. We must learn to call- a spade a spade. Any men violating any girls IS NOT JUSTIFIED despite of his contribution/title/ political identity/family reputation.

Yes, I am pro choice. I am in favor of love. I would /had stand by those couple who fall in love through MUTUAL CONSENT and RESPECT. But I would not stand by those couple who disrespect their partner’s identity and force their partner to change their religion /identity and habits in the name of “SOCIAL ACCEPTANCE/ RELIGIOUS OBLIGATION”. If you can fall in love with indigenous girls , you better not change her indigenous identity at any time , at any cost.

Dear girls, in the name of love / social denial stop changing your identity. You owe that to your community, to yourself. Respect yourself. if your partner says you have to change your religion , your identity than PLEASE NOTE, HE NEITHER LOVES YOU NOR RESPECTS YOU. ‪#‎Maybehedoesnthityou‬ but he is an oppressor. He is using the “superiority card” against you, because he is a moron and believes your identity is dispensable.

It is not your shame. SHAME ON HIM WHO DISRESPECTS YOUR IDENTITY BUT SAYS HE LOVES YOU. SHAME.ON. HIM.

P.S :the saddest part is , few of us were raising this concern for so long…. but most leaders of the society has a tendency to overlook feminists` concern. They think we always exaggerated things. SHAME ON THEM AS WELL.