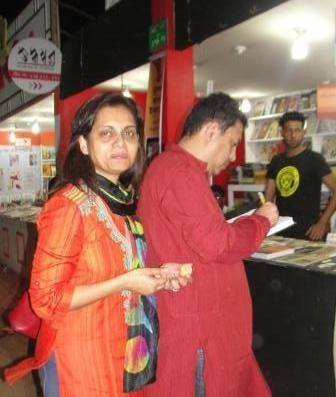 Bonya Ahmed: “I, like Dipan’s father, also do not seek justice. I know with certainty that Tutul’s wife, Ananta’s sister, the friends of Rajib, Babu, Niloy als don’t want justice. When I call Baba (Dr. Ajay Roy, Avijit’s father), he still speaks of hope. He tells me that life doesn’t stop, he encourages me to continue with my work, tells me to begin my life anew. I go silent when I hear him–this eighty year old father who has lost his son. I tell myself it is because they were like this they were able to fight so hard in 1971. We have failed to fight, our generation. Our collective failures have allowed opposing forces to grow in numbers like weeds.

We have no demands for this government. Our only request to them is please stop wasting your energy by constantly shouting “We are the secular party.” You might as well stay silent until your aims are fulfilled: Avijit, Ananta, Rajib, Niloy, Babu, Dipan, these names are a scorecard for you. You can puff up your chests and say that it’s all ‘a political game’, all a ‘perception.’ Stay silent and go on oiling the fundamentalist cleavers, otherwise you might lose a few votes. You know very well that it is your silence that is allowing them to hone their weapons. Perhaps we mistake all this as silence during daytime. Who knows, perhaps you become vocal during the darkness of night, perhaps you play the game of vote sharing with them. I beg you, until you have all your votes in the bag, continue with your silence; we will never come again to ask for justice.
Those who are dead are gone. We will not have them among us, never again. They will never return. No matter how we grieve in this unending silence of an oblivious world, they will never return. I was a student at the Dhaka Medical College for two years during the end of the 1980s. I remember we used to say that Jamaat Shibir would never dare enter the Dhaka University campus. We couldn’t even imagine fundamentalist groups like Ansarullah in those days.
Now, not only have they entered that space, they are glorying in this mad festival of murder after murder. We are all of us helpless, stunned at this dance of destruction. The same university campus where Dipan’s father, Avijit’s father have taught, right there, practically in front of their eyes these fundamentalists have hacked to death their children. That is how audacious they’ve become these days. The don’t need to hide in darkness anymore. They wield their cleavers in well-lit streets, in front of thousands of people, in front of the police. I myself stood in the street, with four cleaver-inflicted head wounds, my hand gushing blood from a lost finger, begging for help from hundreds of people. Did anyone in that crowded street come forward to help? Before Jiban, the journalist, came to help me and Avijit, other people surrounded us in a circle to watch the spectacle. There were policemen in that circle. People like Jiban have grown rare; people like him are hard to find.
Our grief no longer turns into rage; we can no longer create a 1952, a 1969 or 1 1971. This oppressive machine of state has silenced us so successfully that we grow inert in fear. Like deer caught in headlights, we watch this bloodied nation and just stare. I’ve heard from many people that these days those who come forward trying to help are eventually harassed by the police. Which is why people are afraid to help anymore. Which is why it’s possible to enter Niloy’s house and murder him, Ananta can be hunted down in broad daylight, Tutul, Ranadipam and Tareq can be hacked in an office among many people, Dipan can be killed in a crowded place like Aziz Super Market. The murderers know they have nothing to fear. They know their refuge is spreading. They know they will be awarded with the garland of state of silence.
Or going one step further, we are the ones who will be called to account under Section 57.
We have learned that in this country there is no justice in the courts. We know that people like Idris get bail. We know that small-time hired assassins are captured to play out the farce of official Press Releases. Dipan’s father is right–this is political and cultural. I will add a little more and say, this is the result of the plus and minuses of global and national politics and economics. Whether fundamentalism or capitalism–neither is a weak force and the collective strength of these forces are unparalleled in today’s world. What is happening today in our country is pre-planned, a harvest that has been a long time coming. We have given them space, have handed over all our fertile lands. We’ve give them the chance to grow. Their reach is long and deep. Words no longer have an impact; to stop them what is needed is to destroy and rebuild everything from inside. We must do this–before everything falls to evil.”
Translated by Shabnam Nadiya
‪#‎AvijitRoy‬ ‪#‎AnantaBijoyDas‬ ‪#‎NiloyNeel‬ ‪#‎WashiqurBabu‬ ‪#‎FaisalArefinDipan‬ ‪#‎AmioBicharChaiNa‬
শেয়ার করুন: