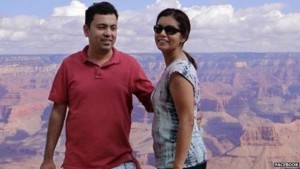 Bonya Ahmed: March 26th marks one month from the date my husband, Avijit Roy, and I were brutally attacked on the Dhaka University campus during the bookfair.  Avijit wrote about science and humanity, and he critiqued religious fundamentalism, he also created the first online Bangla platform for Freethinking. For these reasons, religious extremists hacked Avijit to death with machetes.

The attack occurred in a crowded place with dozens of eyewitnesses, surveillance cameras, and police checkpoints. An Islamist terrorist group, “Ansarullah Bangla-7” has even claimed responsibility on social media for the attack.

Despite all these leads, the only progress that has been made after one month of investigation is a seemingly a tangential arrest. And although the international community has offered help with the investigation, we have yet to see the Bangladeshi government condemn Avijit’s gruesome murder. It surprises us to see that Bangladeshi government has not mentioned a word about this since the day of the murder.

This is alarming on many levels. Where are the leaders of Ansarullah Bangla-7? Why have they not been arrested or questioned? Similar attacks on secular writers have happened before. This turning of a blind eye feeds both the public’s sense of cynicism and the terrorists’ sense of invincibility. We demand that the Bangladeshi government  address religious terrorism at its root  and stop a legal culture of impunity, where writers can be killed without the killers being brought to trial

March 26th is also Bangladesh’s Independence Day—a day that commemorates the founding of a country that was based on secular laws with freedom for all.  Instead, it saddens us that we have to spend today begging for justice against the atrocious deeds of religious fanatics.

As Avijit’s wife, fellow writer, and a freethinker, I reiterate my condemnation of this attack and urge the Bangladeshi government to speak up and pursue a thorough investigation.